LAUNCH THE KWAZULU-NATAL INVEST SA ONE STOP SHOP IN DURBAN 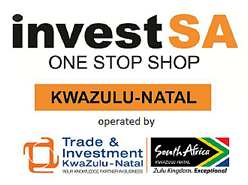 President Jacob Zuma, officially launched the InvestSA One Stop Shop (Invest SA OSS) in KwaZulu-Natal on 18 November 2017 at the Inkosi Albert Luthuli International Convention Centre. The objectives of the provincial Invest SA OSS are to provide strategic guidance, reduce regulatory inefficiencies and reduce red tape for all investors looking to invest in KwaZulu-Natal.ï¿½ï¿½ The process leading up to the launch is demonstrative of a successful collaboration between different levels of government. The centre will be jointly operated by the Department of Trade and Industry (dti), provincial government and the KwaZulu-Natal Department of Economic Development, Tourism and Environmental Affairs. Minister of Trade and Industry, Dr Rob Davies, said that the value-propositions of the OSS are the co-ordination and incorporation of the special economic zones; provincial investment agencies; local authorities and the relevant government departments involved in regulatory, registration, permits and licensing matters.

ï¿½South Africa has excellent investment opportunities in all sectors of the economy and a host of investment incentives and industrial financing interventions that are aimed at encouraging commercial activity and trade rules that favour a further expansion in South Africa's burgeoning levels of international trade,ï¿½ said Davies. The Premier of KwaZulu-Natal, Willies Mchunu, said the facility would assist in attracting foreign direct investment. ï¿½Our long-term vision is to become a prosperous province with a healthy, secure and skilled population and the gateway to Africa and the world. ï¿½As guided by the Provincial Growth and Development Plan, we are focusing on different sectors of the economy such as ICT, maritime, drilling of oil and gas and chemical manufacturing. We continue to invite potential investors representing these sectors from other parts of the globe who will be directed to all corners of the province including the Richards Bay Industrial Development Zone and the Dube Trade Port.ï¿½ President Zuma formally announced the establishment of InvestSA during the State of the Nation Address in February 2016 where business leaders were also informed of the initiative. Business people had brought to the attention of government on numerous occasions the difficulties and delays experienced when having to move from one department or institution to another in order to obtain licences and other services and hence, government responded through this initiative. One Stop Shops - which house government entities like SARSï¿½ Home Affairsï¿½ Environmental Affairsï¿½ Eskom and the Companies and Intellectual Properties Commission all under one roof - have already been rolled out in Gauteng and the Western Cape. KZN MEC for Economic Developmentï¿½ Tourism and Environmental Affairs, Sihle Zikalala, said government was doing away with red tape and "rolling out the red carpet for investors to ensure economic development." ï¿½Investment promotion is critical for our economy. We look upon new or expanding businesses to contribute to much-needed job creation for our people. For us to be able to draw in new investments, we need to create a conducive environment. ï¿½It is for this reason that the One Stop Shop InvestSA Centres are being established. We had been sensitized by businesspeople in various forums about the challenges encountered when establishing businesses in South Africa due to various bureaucratic requirements. The InvestSA One Stop Shops will be the focal point of contact in government for investors to obtain permits, licences and other regulatory requirements. All the services will now be made available under the same roof,ï¿½ said Zikalala.